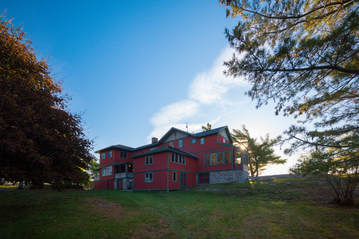 Whiskey Island is located at the southwestern end of the Thousand Islands at the head of Grindstone Island, along the US/Canadian border on the Saint Lawrence River. The families of Morgan, Leavitt, and Carter inhabited this section of the river each summer for over a hundred years, and still have family and cottages in the area today.

Chris Wolf was the first person to build cottages in this section of the river, and built the very first one on Whiskey Island. The original section of the house was built of 2' x 4' planks stacked on top of one another, which still serves for a structurally sound lodge. Throughout the river's history, most of the original cottages in the area have burned down and had to be rebuilt, but due to Whiskey Island’s resilience, her structure remains one of the oldest cottages in the area!
Whiskey was originally owned by a Leavitt in 1875, who was married to Chris Wolf (which is why it was the first island to get a cottage!) However, legend has it that he ran off with a governess so the island was sold in 1914 to Alice Carter's Mother, “Grandma Morgan.” Alice’s son, Bunny Morgan, and his family lived at Whiskey each summer until 1961 when Bunny passed away. When Bunny passed, the island was left to his daughter, Mimi Boyer. Mimi, with her husband and family, inhabited Whiskey every summer until her passing in 1994, when it was left to her daughter Jenny. Jenny then sold it to the Randazzo Family who still own it today.
Whiskey Island was originally named Coral Island back in 1870, due to the maze of shoals that surround her. Because of the mass of shoals and its strategic location on US/Canadian border, Whiskey was the main "drop and run" point for rumrunners during Prohibition. The shoals and rocks surrounding the Island made it easy for the rumrunners to hide and later recover the smuggled liquor. This section of the river was a tricky spot to navigate through, so it was hard for law enforcement to chase the rumrunners.  (It also helped that the rumrunners were the best navigators on the river and they could get a boat through this cut faster than anyone!) As a code to other rumrunners, “Whiskey Island” was adapted to let them know where goods could be stored and recovered if the law was getting in the way.
Although it is unknown exactly when her name was officially changed to Whiskey Island, we know it happened some years after Prohibition. As many people have a great fascination with the Prohibition era, you can still often find divers exploring the shoals surrounding Whiskey, trying to dig up her past and discover what she protected for so many thirsty souls.